The CommerceRuntime is the business logic for Retail POS and other channels. Here are a couple of good rules how to correctly configure it.

Notice that the config files are almost the same, with the one difference that the online version has 3 more handlers (ProductAvailability, PurchaseOrder related). Those are based on RTS calls which cannot be done in offline mode.

This should help with technical and organizational software aspects of a Retail implementation: Implement Finance and Operations Retail project

There may be a time during a Retail project when you likely will hear someone saying: “Doing X in POS is slow. What’s going on?”. If this is the case, my hope is that this during the implementation phase and not on a live production environment.

What do we do to find out what is wrong? Is it a customization to the CRT business logic, latency to an external call, generic latency to the server from POS, or a Microsoft bug?

The following steps will hopefully help to give an answer to these questions.

Latency between POS and RetailServer

Some things to remember:

RetailServer could be either Microsoft hosted or RSSU-hosted. It is agnostic to this investigation, but you need to make sure you are testing against the right RetailServer (especially if you use both Microsoft-hosted and RSSU-hosted at the same time).

RSSU-hosted RetaiSserver, even in production, is under the management of the customer, so the steps below can be carried out, but with care.

Sometimes the slowness could occur only when there are multiple POS used at the same time. If that is the case, you can still use the steps below, but would have to reproduce the issue by running multiple POS.

In some cases it is very useful to see how a web site would perform under certain network conditions that are worse than what you have currently. You can use this tool to simulate it: https://jagt.github.io/clumsy/. As an example, if you want to simulate what a network latency of 200ms looks like while using POS, run it on the same computer as POS and configure it with 200ms outbound. 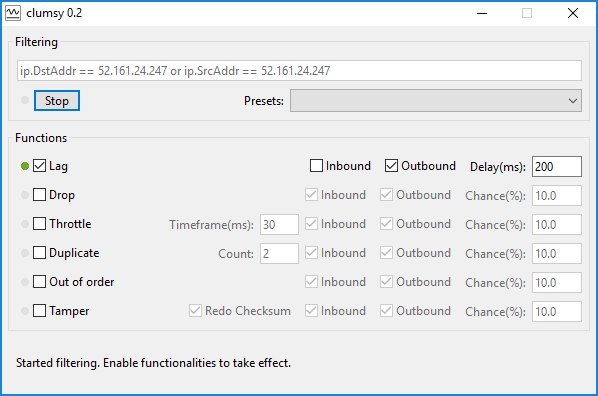 Even if you are on a good network, with this tool you can evaluate what it would look like for someone with higher latency (or other network conditions).

One solution is to look at all EventLog entries for anything “Dynamics”. Here is how to do it:

This video demonstrates how to store application settings securely and manage them in AX. These settings are needed for AX business logic and CommerceRuntime business logic. The data is fetched via a RetailTransactionServiceEx call. The CommerceRuntime service takes care of calling the RTS and caching for a configurable period.  Video also shows how to test this by exposing it via RetailServer and using the RetailServer TestClient.